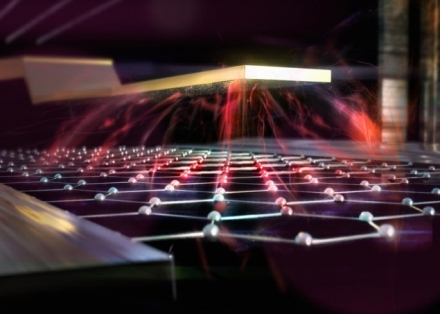 Two graphene-based bolometers that are sensitive to detect single microwave photons have been built by independent teams of physicists. The devices could find a range of applications in quantum technologies, radio astronomy and even in the search for dark matter.

One bolometer was created in Finland by Mikko Möttönen and colleagues at Aalto University and VTT Technical Research Centre of Finland, while the other was created by an international team led by Kin Chung Fong at Raytheon BBN Technologies in the US.

A bolometer measures the energy of incoming radiation by determining how much the radiation heats up a material. Bolometers capable of detecting single microwave photons would be very useful in creating quantum computers and other technologies that use superconducting quantum bits (qubits). This is because superconducting qubits interact via microwaves and single photons provide a very efficient way of transferring quantum information between qubits.

So far, however, creating single-photon microwave detectors has been difficult because of the relatively low energies of microwave photons. The Finnish team had addressed the low-energy problem by creating a bolometer that used a gold-palladium alloy to absorb photons. While this device operates at very low noise levels, it is not fast enough to be useful when it comes to measuring the state of a superconducting qubit.

Now, Möttönen and colleagues have replaced the gold-palladium absorber with one made from graphene, which has a very low heat capacity. This makes graphene ideal for making a bolometer because heat capacity is a measure of the energy required to raise the temperature of a material by one degree.

“Changing to graphene increased the detector speed by 100 times, while the noise level remained the same,” explains team member Pertti Hakonen. Indeed, the new device can make a measurement in less than microsecond, which is on par with technology that is currently used to measure the state of qubits. Hakonen adds, “After these initial results, there is still a lot of optimization we can do to make the device even better”.