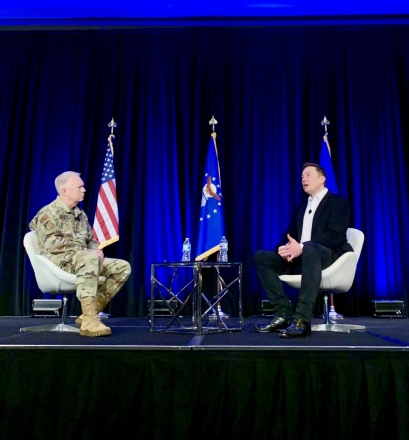 From Forbes and Starburst:

Elon Musk told a group of assembled space entrepreneurs that if they can build a rocket component better than SpaceX can, “we would love to buy that,” noting  his private space startup used to build the landing legs for its Falcon 9 rocket but now buys them from race car manufacturer All American Racers. “We’d love to outsource more.”

Musk made his remarks Tuesday as part of an on-stage interview that touched on how he enters a new business (he avoids market research), Twitter and daily news (likes the former, avoids the latter) and his TV habits at the inaugural United States Air Force Space Pitch Day in San Francisco. The event was held by the Air Force in cooperation with Starburst Aerospace, a space startup accelerator and consulting firm. Over 75 space startups were invited to pitch more than 100 venture capitalists in attendance, while others pitched Air Force personnel directly.

Investors are increasingly targeting commercial space companies. Over $5 billion in venture capital has been invested in space startups in 2019 so far, according to venture firm Space Angels. Several Wall Street firms have projected that the overall space market could more than triple in size to over $1 trillion in the next 20 years.