next generation rockets preparing for blast off 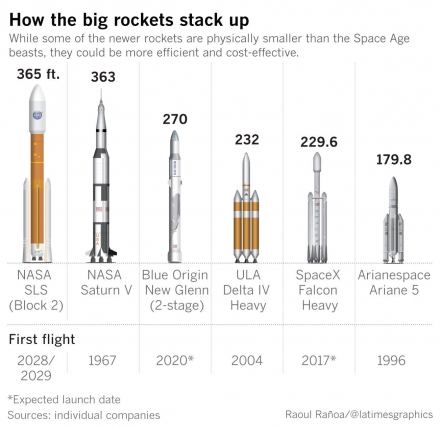 From the Los Angeles Times:

It’s been 44 years since the mighty Saturn V last thundered skyward from a launch pad at Kennedy Space Center in Florida. The towering rocket, generating enough power to lift 269,000 pounds into orbit, had been the workhorse of the Apollo moon missions.

Later this year, SpaceX plans to launch its most powerful rocket yet from the same pad. The long-awaited Falcon Heavy is key to the Hawthorne company’s plans to ramp up its defense business, send tourists around the moon and launch its first uncrewed mission to Mars.

But unlike the Saturn V, the Falcon Heavy will have plenty of competition.

Years in the works and the product of hundreds of millions of dollars of investments, a new generation of huge rockets will soon take to the skies. Their manufacturers range from space start-ups to aerospace giants to the space agencies of the United States, Russia and China.