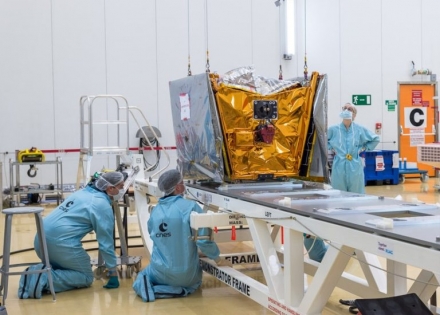 If all continues to go as planned, OneWeb’s first six spacecraft will finish on-orbit testing this spring, clearing the path for an initial system of 648 satellites — 600 operational and 48 spares — and setting the stage for a larger system that could eventually number 900 or more satellites.

Orbiting the initial 648-satellite constellation will entail the largest launch campaign in history. In late summer of early fall, OneWeb expects to start launching 30 or so satellites at a time on Soyuz rockets lifting off every three to four weeks. In addition these 20 Soyuz missions booked through European launch service provider Arianespace, OneWeb is also counting on one or more Ariane 6 launches plus a to-be-determined number of Virgin Orbit LauncherOne missions to complete its constellation by 2021.

OneWeb and its satellite manufacturing partner Airbus Defence and Space have crammed 10 gigabits per second of capacity into spacecraft the size of dishwashers. Tom Enders, Airbus Group’s outgoing CEO, said Feb. 14 that OneWeb satellites cost $1 million each to produce, and that the companies will be able to complete 350 to 400 satellites annually from their joint venture OneWeb Satellite’s $85 million Florida factory opening in April. The first batches of Florida-built satellites should be delivered to OneWeb toward the end of the third quarter, Airbus spokesman Guilhem Boltz said.

OneWeb’s satellites are a technological marvel. Traditional geostationary communications satellites are as big as trucks, take years to build, typically cost $100 million or more and still might generate less throughput than a few OneWeb satellites.

But the satellite industry has seen other technological marvels reach orbit while the business plans behind them fall back to the ground.

The most notorious failure was Teledesic. The Bill Gates-backed venture raised $1 billion in the 1990s to build an 840-satellite “internet in the sky” but flamed out a few years after launching a single demo satellite.

OneWeb’s current risks are seen as primarily financial, not technical, according to Eric Anderson, a former Moog chief technologist and CSA Engineering executive involved in Teledesic and Iridium. He’s now a space consultant and investor.